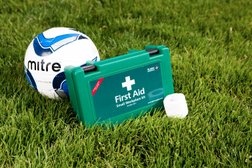 Witton Students two matches away from a prestigious final.

Congratulations to Witton Albion Academy team who under the guidance of Coach Martyn Irvine, have reached the Quarter Finals of the ESPFA National Cup with one group game to spare.

The team's final Northern Group game is at home to Ossett United on THURSDAY, 5th MAY at Sandbach Community Football Centre with a 12pm kick off.

The draw for the Quarter Finals and Semi Finals were made today and are regionalised.

Witton will play Skelmersdale United at Sandbach Community Football Centre on THURSDAY, 12th MAY with a 12pm kick off.

The other Quarter Final is between Mickleover FC & Runcorn Linnets and should Witton progress, they will meet the winners in the Semi Finals on MONDAY, 16th MAY at Sandbach Community Football Centre with a 12pm kick off.

The Final will be played at Stafford Town FC on THURSDAY, 19th MAY.